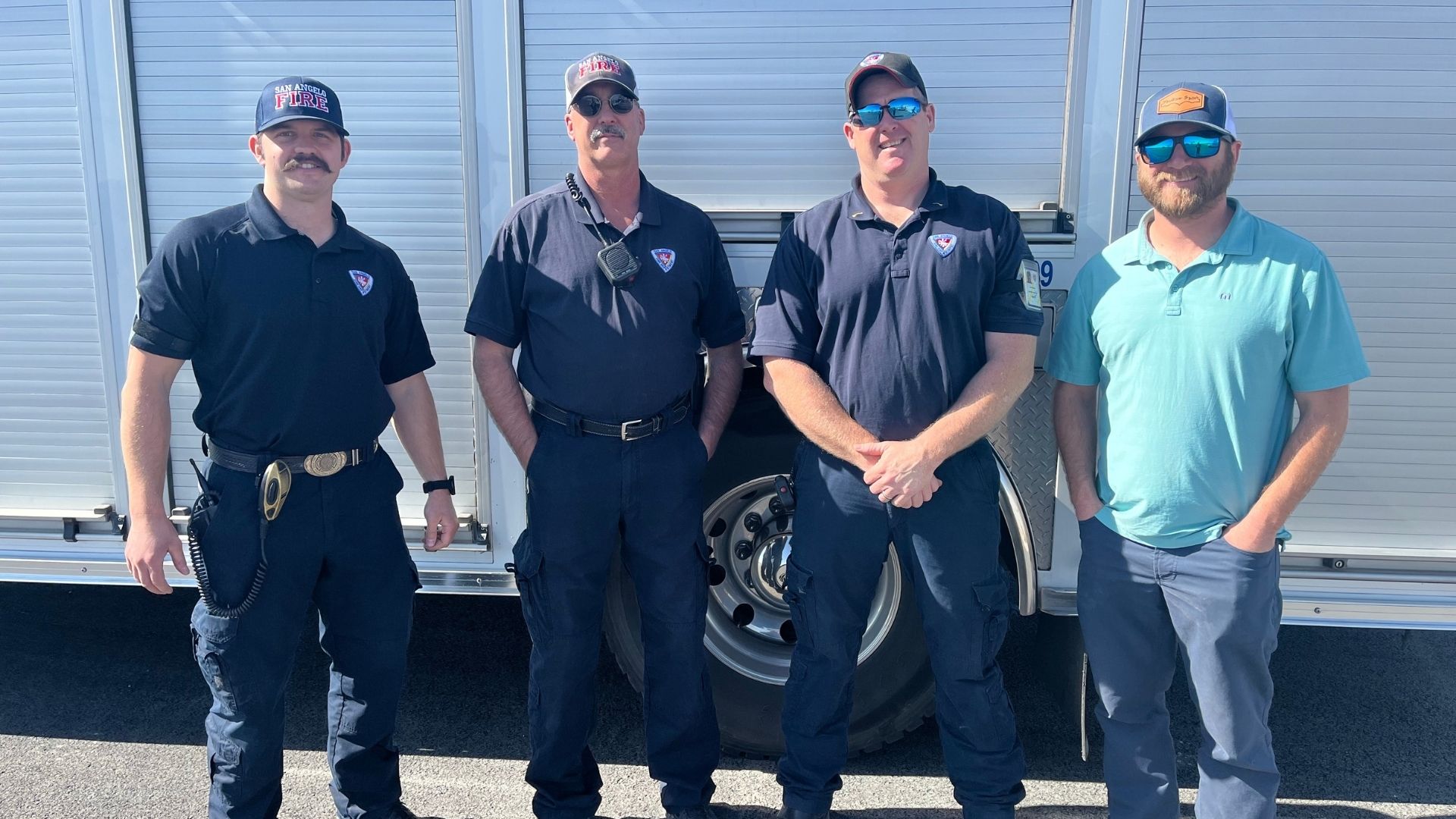 Airway Services recently partnered with the San Angelo Fire Department to learn more about how to perform rescues on wind turbines. They learned about the hazards that first responders might encounter, as well as what equipment may be used during an emergency rescue in a wind turbine environment.

Additionally, the firefighters shared information about their high-angle rescue equipment and offered techniques to help Airway’s safety instructors understand their functions and limitations.

This was the first of several planned meetings between Airway Services and the department.

The partnership began when Buddy Lemons, the Master Trainer of High Angle Rescues with the department reached out to Airway.

“The San Angelo Fire Department has one unit, one truck, one crew that’s dedicated to high-angle rescue,” said Dustin Jenson, the Director of Safety and Training for Airway Services. “They’re often called out into the county and sometimes into surrounding counties, for emergency rescues. Buddy’s concern was, with the wind industry really growing in our area, and wind turbines starting to creep into Tom Green County and some of the surrounding counties that we work in…he was concerned that there might be a need for some familiarization with a wind turbine and their crew.”

Jenson said the big thing they wanted to learn more about was the rescue equipment.

“We found out that there’s a big difference between the devices and equipment that we use in the wind industry, as opposed to what they use for fire and rescue situations,” Jenson revealed. “It’s the same principle, but the pieces of equipment are very specific to our industry. And so, they needed to get themselves trained in the proper use of our equipment, so that if they’re ever called upon to do a rescue in a wind turbine, they know what they’re facing.”

But Jenson said that future conversations will focus on the training aspect.

“We want those guys to come here while we’re doing a training class and teaching our technicians how to be those first responders and how to perform rescues,” he stated. “We want them to see what our guys are trained to do”

Jenson said that it was an honor that the fire department reached out, because they recognized the expertise that Airway Services offers when it comes to wind turbines.

“It’s flattering,” he said. “We like to think of ourselves as a leader in the industry, but when our local first responders start to recognize that too, and they say ‘Hey, these guys at Airway, they know their stuff,’ and they see the training that we’re doing right outside our back door; it’s catching their attention. It means a lot that they would take that initiative to reach out and help us coordinate their training and also coordinate that relationship as well.”

“The more conversations you can have in advance, and the more knowledge that your team can have on each individual organization’s role during an emergency situation, the better you’re gonna perform when the stuff hits the fan,” Jenson said. “I think more than anything, it gives our customers a little more confidence in what we are prepared for. It gives them a little more confidence on that training and that understanding of what emergencies we could encounter. It gives them confidence to know that we’ve done our homework, we’ve done the work to lay the foundation to prepare for the most likely scenario so that, if something does happen on their sites, we’re prepared to respond adequately and efficiently.”

Established in 2009, Airway Services is an Independent Service Provider (ISP) that offers full Operations and Maintenances solutions to asset owners and OEMs. We can work independently or in conjunction with our clients’ existing staff to support construction, 24/7 site management, major component exchanges, scheduled preventative maintenances, and other repair services. Our technicians have experience working with most major wind turbine manufacturers including Siemens Gamesa, Vestas, Mitsubishi, GE, and others.

Every Airway technician completes a two (2) to three (3) week GWO training program that is conducted in-house at our headquarters in San Angelo, Texas. We work hand-in-hand with asset owners and OEMs to ensure complete quality from the first step to the last.

We use cookies on our website to give you the most relevant experience by remembering your preferences and repeat visits. By clicking “Accept”, you consent to the use of ALL the cookies.
.
Cookie SettingsAccept
Manage consent

This website uses cookies to improve your experience while you navigate through the website. Out of these, the cookies that are categorized as necessary are stored on your browser as they are essential for the working of basic functionalities of the website. We also use third-party cookies that help us analyze and understand how you use this website. These cookies will be stored in your browser only with your consent. You also have the option to opt-out of these cookies. But opting out of some of these cookies may affect your browsing experience.
Necessary Always Enabled
Necessary cookies are absolutely essential for the website to function properly. These cookies ensure basic functionalities and security features of the website, anonymously.
Functional
Functional cookies help to perform certain functionalities like sharing the content of the website on social media platforms, collect feedbacks, and other third-party features.
Performance
Performance cookies are used to understand and analyze the key performance indexes of the website which helps in delivering a better user experience for the visitors.
Analytics
Analytical cookies are used to understand how visitors interact with the website. These cookies help provide information on metrics the number of visitors, bounce rate, traffic source, etc.
Advertisement
Advertisement cookies are used to provide visitors with relevant ads and marketing campaigns. These cookies track visitors across websites and collect information to provide customized ads.
Others
Other uncategorized cookies are those that are being analyzed and have not been classified into a category as yet.
SAVE & ACCEPT
Powered by