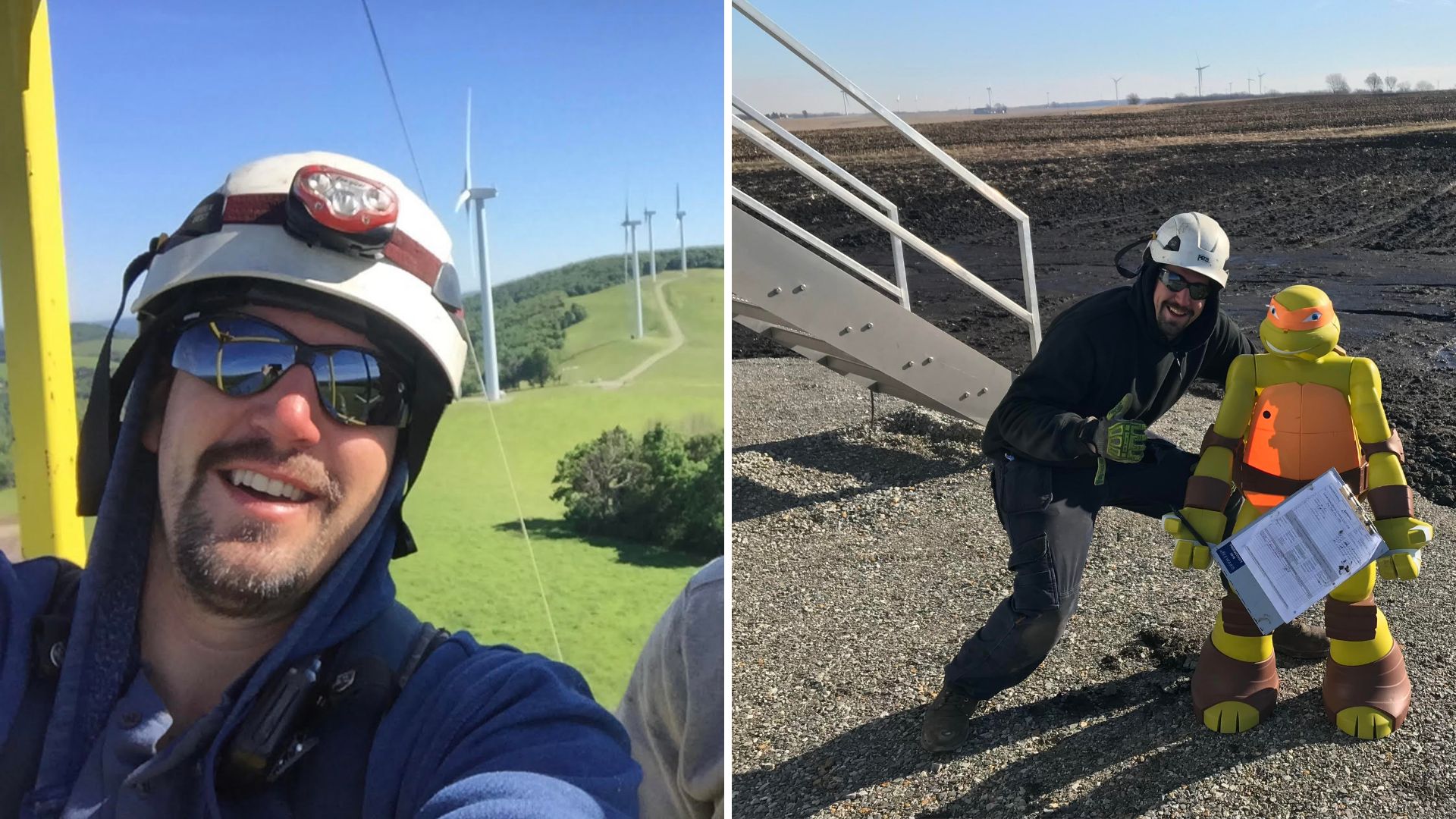 Michael Johnson (MJ) is not afraid of heights, and that’s probably a good thing given that he’s spent the
majority of his adult life scaling tall structures.

MJ has been working in wind energy for more than 15 years, 12 of which have been spent at Airway Services. Before AWS, MJ worked for a telecommunications business on cellphone towers that eventually expanded to include a wind division.

“The company I worked for took a bunch of guys from Wisconsin who were young and dumb enough to work on cellphone towers, and stack guide towers with cable winches and a gin pole. We had barely seen a wind turbine before and they sent us down to Guyman, Oklahoma,” MJ laughed. “Our job was to drop rotors and swap out blades on the ground. We’d never worked on wind turbines before, let alone had any clue how to. There was definitely a learning curve. It took us 16hrs to drop our first rotor. By the end of that project we were dropping a rotor, swapping out all 3 blades, and flying the rotor in a day. That was a good start to my career, because we learned exactly what not do and why.”

It was the definition of ‘learning on the job,’ and that’s exactly what MJ did. Eventually, though, it paid off.

“I have built eight different manufacturers of towers and then 15 different models within those eight different manufacturers,” MJ revealed. “Building them as a top out crew in construction, working as a lead flagger all the way to a foreman. I’ve also done a bunch of large corrective work, large corrective lead (which is basically their foreman), gear boxes, generators, main bearings, rotor drops, and single blade swap outs for all four of the major wind industry OEM’S.”

For the last three years, he’s been a TFA (Technical Field Advisor) and Lead TFA at his current project in
California, he’s somewhat of a one-man-show. “At this project in California, it’s only one tower,” MJ said. “I’m the Site Manager, the Lead TFA, the TFA, the stockkeeper, and the Safety guy’s not on site all the time, so I fill that role when he’s gone too.”

MJ makes it easy to place him within the construction realm due to his vast knowledge and experience. The
OEM’s have recognized him for several safety achievements and continue to entrust him to lead large
complex issues for the AWS team without their leadership on site.

Every time MJ climbs a tower, he takes his life into his own hands. But that’s nothing new for him.

MJ is not afraid to make decisions, work hard, tackle challenging scopes of work, and have fun while working with his teammates. And he’s certainly not afraid to reach for new heights.

Established in 2009, Airway Services is an Independent Service Provider (ISP) that offers full Operations and Maintenances solutions to asset owners and OEMs. We can work independently or in conjunction with our clients’ existing staff to support construction, 24/7 site management, major component exchanges, scheduled preventative maintenances, and other repair services. Our technicians have experience working with most major wind turbine manufacturers including Siemens Gamesa, Vestas, Mitsubishi, GE, and others.

Every Airway technician completes a two (2) to three (3) week GWO training program that is conducted in-house at our headquarters in San Angelo, Texas. We work hand-in-hand with asset owners and OEMs to ensure complete quality from the first step to the last.

We use cookies on our website to give you the most relevant experience by remembering your preferences and repeat visits. By clicking “Accept”, you consent to the use of ALL the cookies.
.
Cookie SettingsAccept
Manage consent

This website uses cookies to improve your experience while you navigate through the website. Out of these, the cookies that are categorized as necessary are stored on your browser as they are essential for the working of basic functionalities of the website. We also use third-party cookies that help us analyze and understand how you use this website. These cookies will be stored in your browser only with your consent. You also have the option to opt-out of these cookies. But opting out of some of these cookies may affect your browsing experience.
Necessary Always Enabled
Necessary cookies are absolutely essential for the website to function properly. These cookies ensure basic functionalities and security features of the website, anonymously.
Functional
Functional cookies help to perform certain functionalities like sharing the content of the website on social media platforms, collect feedbacks, and other third-party features.
Performance
Performance cookies are used to understand and analyze the key performance indexes of the website which helps in delivering a better user experience for the visitors.
Analytics
Analytical cookies are used to understand how visitors interact with the website. These cookies help provide information on metrics the number of visitors, bounce rate, traffic source, etc.
Advertisement
Advertisement cookies are used to provide visitors with relevant ads and marketing campaigns. These cookies track visitors across websites and collect information to provide customized ads.
Others
Other uncategorized cookies are those that are being analyzed and have not been classified into a category as yet.
SAVE & ACCEPT
Powered by